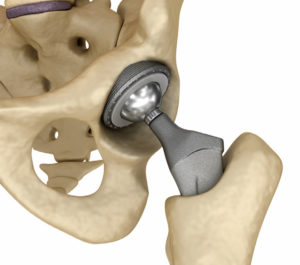 Patients who undergo a total hip replacement have their natural hip replaced with a prosthetic hip generally composed of a femoral stem, a femoral head, and a cup fitted into the acetabulum.

In the past, orthopedic surgeons primarily limited hip replacement to patients 60 years and older due to limitations on the life of the device. However, with improvements in the technology and the growing demand for replacement in the younger population, surgeons no longer have a threshold age and instead look at a patient's overall health to determine whether the patient will benefit from a replacement.

The Medical Device Amendments of 1976 (MDA) created three classes of medical devices ranked by their potential to cause harm. Hip implant devices are Class III, which are the most high-risk.

Class I and Class II devices are considered less risky, and so the MDA allows them to go through a process  defined by Section 510(k) of the Food, Drug and Cosmetic Act, which only requires that substantial equivalence to devices already on the market be shown.

Class III devices, on the other hand, are required to undergo a more rigorous pre-market approval process that includes clinical trials. In reality, this is not how the vast majority of hip implants get to market.

Due to a loophole in the MDA, Class III devices can temporarily get to market through the 510(k) process. As of today, the FDA has not yet closed this loophole, allowing hip implant devices to be available on the market without the required pre-market approval process.

Metal on metal hip implant devices were developed to provide an alternative to polyethylene and ceramic devices. Polyethylene wear debris causes an immunological reaction that results in osteolysis, and ceramic implants are prone to fracture. Besides providing an alternative to avoid these problems, metal on metal devices were also supposed to generate less wear debris and decrease the risk of dislocation.

A significant risk with metal on metal devices is shedding of metal debris and release of cobalt and chromium ions into the bloodstream, which can cause painful soft tissue destruction and osteolysis with implant loosening and device failure requiring surgical revision.

Unfortunately, the promise of these devices has not been fulfilled. Instead, data from other countries' joint registries, such as the Australian and British, has shown that they have a lower survivorship rate than alternative devices. The high revision rate led regulatory agencies in several countries to release healthcare alerts and medical device makers to recall certain implants, such as DePuy's ASR, with an anticipated failure rate of 49% at six years.

Thousands of cases have been filed across the country regarding injuries caused by Class III devices marketed through 510(k). Where litigation is pending in multiple federal districts, either or both parties can move for centralization with the Judicial Panel on Multidistrict Litigation.

The Panel, after hearing argument, will determine whether it would be appropriate to transfer all the actions to one judge to handle all the pretrial proceedings, known as a Multidistrict Litigation ("MDL'). The purpose of centralization is to avoid duplication of discovery, inconsistent pretrial rulings, and conserve judicial and the parties' resources. Once pretrial proceedings conclude, the cases that have not terminated in the MDL are remanded to the originating federal district for trial.

Once an MDL is created, the MDL judge sets a schedule for filing applications to the court. Although there is variation, the court generally appoints the positions of plaintiffs' lead counsel or co-lead counsel, plaintiffs' liaison counsel, and the members of the plaintiffs' executive committee and plaintiffs' steering committee. These individuals acting together as plaintiffs' leadership are charged with representing the interests of all plaintiffs in the MDL.

Metal on metal hip implant cases have been consolidated into several MDLs based on manufacturer and model.

The following are the currently pending metal on metal hip implant MDLs and the most recent statistics from the Panel regarding the number of cases filed in each MDL:

Hadley L. Matarazzo oversees Faraci Lange's defective drug and medical device practice and has been litigating claims related to metal-on-metal hip implants for several years. She had the lead trial case in the DePuy ASR MDL and was appointed by the court to the Plaintiff's Steering Commitee in the Biomet hip implant MDL.

If you have experienced complications from a metal-on-metal hip implant, or another medical device, contact us today.