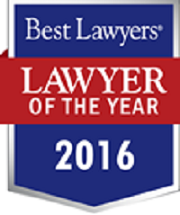 Two Faraci Lange attorneys have been selected as Best Lawyers' 2016 Lawyers of the Year.

Frank J. Frascogna, of Orchard Park, has been named the Best Lawyers' 2016 Buffalo, N.Y. Medical Malpractice Lawyer of the Year.

The Faraci Lange attorneys received high ratings in Best Lawyers' surveys by earning a high level of respect among their peers for their abilities, professionalism and integrity. Best Lawyers designates Lawyers of the Year in certain legal specialties in large legal communities. Only a single lawyer in each specialty in each community is selected as the Lawyer of the Year.