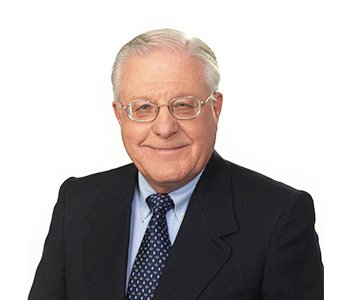 Angelo G. Faraci founded the law firm that bears his name in 1968 and has been representing victims of negligence for over 50 years. He focuses his legal practice on personal injury litigation, primarily in the areas of medical malpractice, product liability, premises liability, wrongful death, construction-related injuries, automobile accidents, toxic tort cases and admiralty cases.

He was inducted into the International Academy of Trial Lawyers in July 2003 and was also a recipient of the Daily Record’s Nathaniel Award the same year. Angelo has been awarded Martindale-Hubbell’s highest rating by his peers for professional excellence and ethical standing. In addition, Angelo has been selected as one of Upstate New York’s Super Lawyers in personal injury litigation every year since 2007, and was among the Top 50 Super Lawyers in Upstate New York in 2007, 2008, 2009, 2011 and 2012.

In 2018, Angelo was honored with the Monroe County Bar Association‘s President’s Award for Professionalism. This annual award recognizes a member of the legal community who exemplifies a commitment to those principles which are embodied in the concepts of professionalism, civility and collegiality.

In 2012, Angelo was selected to become a Certified Federal Court Mediator in the Western District of New York.

Naturally, dealing with a medical malpractice suit is a delicate and troubling matter, and daunting for a lay-person. However, at every step of the way Angelo Faraci and his associates at Faraci Lange eased me along to a most satisfactory resolution, i.e. settlement out of court. Besides Ang, I’d like to include John Falk, Rosemarie DiMuro, Kim Ackles, and Ann Steinmetz as being not only helpful but compassionate and considerate in seeing me and my wife through this episode. Without their combined expertise and attention, I’m sure we would not have fared nearly so well. I thank them all and would readily endorse them unreservedly.

Faraci Lange came into my life in my darkest days. I lost my husband in a horrific accident and was a lost soul. I knew when I first met with Angelo and his team that they were honest and hardworking. I was treated like I was part of their family and felt protected by them. Throughout my entire journey with the firm I was treated with kindness and respect. I would 100% recommend this firm to everyone I know. I had first class representation and gained friends that I know I can call on when needed.

Following hip replacement surgery on January 31, 2013 I learned that during the procedure the surgeon critically severed my sciatic nerve. The consequence of this error has resulted in permanent loss of function in my right lower leg and drop foot.

My family contacted Faraci Lange Attorneys immediately and Angelo Faraci and John Falk called upon me during my hospital stay. From that visit, and throughout the following six years, these two gentlemen have become notably significant in my life. These two superb professionals have counseled me through the process of dealing with the many challenges, delays and negotiations involved in filing a malpractice claim. They never lost sight of the goal of winning a fair settlement for me and their patience, support, compassion and perseverance consistently sustained me.

It has been a privilege to have Angelo Faraci, John Falk and the outstanding staff at Faraci Lange represent me. Thank you for allowing me to submit this testimonial.