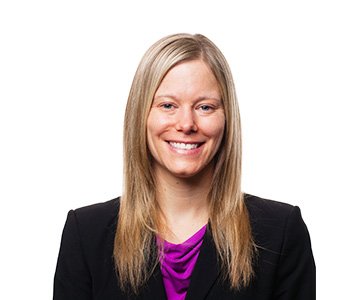 Since joining Faraci Lange in 2010, Hadley has handled all types of cases. She is Co-Lead counsel in the Excellus Data Breach class action litigation and serves on the Plaintiffs’ Steering Committee in the Bard IVC Filter MDL. Most recently, Hadley was appointed to represent plaintiffs as Co-Lead Interim Class Counsel in the Hoosick Falls water contamination lawsuit.

Hadley is also litigating claims related to metal-on-metal hip implants, including DePuy ASR, DePuy Pinnacle, Biomet M2a Magnum, and Stryker Rejuventate/ABG II. Hadley had the lead trial case in the DePuy ASR MDL in which a global settlement was announced in the fall of 2013 and was appointed by the court to the Plaintiffs’ Steering Committee in the Biomet hip implant MDL pending in federal court in Indiana and to the Science Committee in the Stryker Rejuvenate/ABGII hip implant MCL pending in state court in New Jersey. She is also investigating and litigating claims related to several other medical devices and pharmaceutical drugs, including, but not limited to, Zimmer Durom hip implants, transvaginal mesh, Risperdal, Xarelto, Pradaxa and testosterone replacement therapy such as AndroGel. Hadley has also settled claims related to the ingestion of Yaz/Yasmin/Ocella.

Hadley was awarded The Daily Record’s Up & Coming Attorney Award in 2011, The Daily Record’s Top Women in Law in 2014, and the 2014 President’s award by the New York State Academy of Trial Lawyers. She was listed as an Upstate New York Rising Star from 2013-2015 and has been selected as an Upstate New York Super Lawyer from 2016-2019. In 2019, she was chosen to their prestigious Top 25 Women Upstate New York List. Hadley has also been listed in Best Lawyers since 2018. She was named Best Lawyers’ Lawyer of the Year for Product Liability litigation in their 2020 edition and for Medical Malpractice in the 2019 edition.

Hadley has been appointed to the Board of Public Justice, as well as to the Board of Directors of the Finger Lakes Land Trust. She also serves as the Chair of the American Association for Justice’s Consumer Privacy/Data Breach Litigation Group. She is a member of the Greater Rochester Association for Women Attorneys, Women En Mass and previously served as the New York State Academy of Trial Lawyers‘ Board of Directors President.

Prior to joining Faraci Lange in 2010, Hadley practiced for four years as an associate in the Environmental Toxic Tort Unit of Weitz & Luxenberg, P.C. in New York City. At Weitz & Luxenberg, she represented individuals and businesses harmed by environmental toxins. Hadley was the lead attorney for the plaintiffs in Franco, et al. v. Coronet Industries, Inc. where she obtained a settlement for more than 1,000 individuals in Plant City, Florida harmed by heavy metals in their drinking water and air. She also represented the County of Suffolk in the lead case in the MTBE MDL as well as several Connecticut companies, a Connecticut water provider and a town in Connecticut, which resulted in a settlement.

Hadley graduated from Rutgers School of Law Newark where she was the co-chair of the Public Interest Law Foundation and a Legal Services of New Jersey Fellow. While interning at Legal Services of New Jersey during law school, she co-founded the Prisoner Re-entry Project, which removed civil legal barriers to successful re-entry of incarcerated individuals into society.

Once a week, Hadley tutors Rochester city students at the Adlai E. Stevenson School No. 29. She also likes to spend time with her husband and two kids, hike, trail run, and snowboard.

Hadley Matarazzo, right from our first phone conversation, showed me that she was very knowledgeable about the product recall that had affected me. She outlined the steps she would take to get this action started and I was notified of her progress and what steps she was working on and what was next. She was compassionate, understanding and I felt comfortable with her from the start. She did a great job, which resulted in a very fair settlement for me. Hadley’s assistant, Teresa Zukoski, was an excellent communicator and always followed up with any requests or follow up.

Although it took a while to receive my settlement, Hadley Matarazzo and her secretaries could not have been more helpful, patient, and caring. In spite of the fact that she was involved with many other cases similar to mine, I was always made to feel that I was being cared for on a personal level. Along with this, I was very impressed with her professionalism and acumen. In my opinion the Faraci Lange Law Firm is the best in the area.

I 100% recommend Faraci Lange to anyone! I cannot express how hard Hadley worked and the detail and care she provided during the process.

I had the pleasure of having Hadley as my Attorney and I was very happy with the results. She was very qualified, intelligent and prepared. She surely left me with a lot of confidence in her ability to take care of my needs. I was quite happy with the quality of her work and the result she gave me along with very sound advice. No promises were falsely made at first and she did deliver. I also had quite a bit of contact with Terrie and was quite impressed with her as well. All in all, I found the experience great and unlike ads for other attorneys, no false promises. Just very professional behavior and what I felt were admiral results.

I was always kept in the loop as to the progress of the claim. I wasn't even sure that I wanted to pursue a claim but my husband convinced me that it was important. I am pleased with the settlement. I am sure that Ms. Matarazzo’s expertise played an important role in the claim.

I was very pleased with their professional and courteous way in treating me. Their explaining things to me in layman’s terms was very important to me and helped me understand the process. Hadley and her assistant Teresa made it a very easy experience. I will recommend them to all my family and friends.

I cannot thank you enough for all the work [Hadley] has done for me. I had dreaded what this process would be like. But you just took charge and made everything happen. Again, thank you very much

Hadley Matarazzo and her assistants were just terrific. Always helpful, kind and truly helpful with answers to questions I had. She also helped me to relax during the litigation. It was a very interesting procedure and I’m glad to have closure. Hadley made all aspects of the claim run smoothly. She is a really nice person and I would recommend her to anyone needing a lawyer. Of course, Faraci Lange too.

Excellent service from Hadley and Teresa. They kept me updated and either e-mailed me or called me soon after any inquiry. Other attorneys spoke highly of Hadley.

I was pleasantly surprised in working with Faraci Lange. I say this because they never seemed like they were ever too busy to speak with me and address my issues. I personally worked with Hadley Matarazzo who was highly professional and caring. I am not sure if I would have “stayed with” the lawsuit is it were not for Hadley and Teresa Zukoski. A great team that demonstrated compassion and savvy.