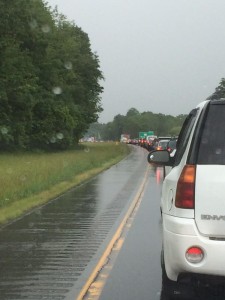 Following an auto accident crash in Chili Sunday afternoon on Interstate 490 near Route 259, the two victims are in critical condition at Strong Memorial Hospital.

Reid Holmes, 59, and his father, Lawrence Holmes, 83, became trapped in their SUV after it rolled several times due to the crash.

Officials with the Monroe County Sheriff's Office said two vehicles were traveling eastbound on I-490 about 1:15 p.m., when Anthony L. Bridges, 23, driving a car attempting to pass a sport utility vehicle instead clipped the vehicle from behind. Anthony Bridges was allegedly "speeding in and out of traffic," said Cpl. John Helfer, spokesman for the sheriff's office. Reid Holmes lost control and the vehicle rolled several times in the median, Helfer said.

Anthony Bridges lost control and went off the roadway and into some trees, according to deputies. He and his passenger, Darryl Bridges, 27, were also taken to Strong Memorial Hospital with minor injuries. Anthony Bridges allegedly smelled of marijuana, Helfer said.

Anthony Bridges was charged with two counts of second-degree assault, a felony, and numerous vehicle and traffic violations, including driving while ability impaired by drugs.

If you have suffered injuries as a result of someone else's negligence, reach out to our firm today.