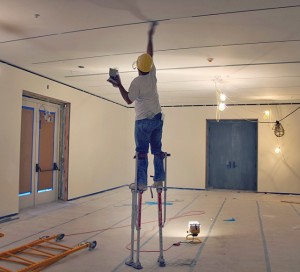 Court of Appeals applies Melber v. 6333 Main Street to dismiss a Labor Law 240(1) claim by a plaintiff who sustained injuries after he slipped on ice and fell to the floor while using stilts. A sole dissent by Chief Judge Lippman accuses the majority of an unwarranted expansion of Melber.

On April 2, 2015, the Court of Appeals decided Nicometi v. The Vineyards of Freedonia, LLC, a case commenced under Labor Law §240(1).  Nicometi was using stilts inside of a newly constructed apartment building to reach a ceiling where he was installing insulation.  Unfortunately, there was a thin layer of ice in the area where Nicometi was working.  While standing on stilts and installing insulation, Nicometi took a step and because of the ice, he slipped and fell to the ground.

The defendants analogized Nicometi's accident to another 'stilts' case decided by the Court of Appeals, Melber v. 6333 Main Street, in which a worker tripped over electrical conduit protruding from the floor while he walked on stilts to retrieve a tool. The Court in Melber dismissed the §240(1) cause of action ruling that the accident was caused by an ordinary tripping hazard of the workplace rather than the kind of elevation related danger against which 240(1) is supposed to protect.

Taking their cue from Melber, the defendants argued that Nicometi's fall was similarly caused by an ordinary hazard of the workplace (e.g.) ice. The Court agreed and Nicometi's §240(1) claim was dismissed. Yet, the Court's comparison of the ice condition faced by Nicometi to other ordinary construction site hazards in cases previously before the Court was not particularly convincing to Chief Judge Lippman who wrote the sole dissent:

"The majority finds that ice is indistinguishable from an electrical conduit (Melber), a portable light (Cohen v. Sloan Memorial Cancer Ctr.) or protruding pipes (Nieves v. Five Boro AC & Refrigeration). However, when stilts or ladders are placed on top of the ice, the combination of the two presents and exacerbates elevation -- related risks."

More particularly, the Chief Judge was at a loss to differentiate, as the majority did, between the dangers faced by workers standing on stilts versus standing on ladders:

"The majority would have us believe that while ladders placed on slippery substances present an elevation -- related risk, stilts under the same circumstances do not. Because I believe stilts placed on ice creates the same elevation related risk as do ladders, I would hold that Labor Law §240(1) applies here."

The difference between ladders and stilts, argued the majority, had to do with the nature of ladders which are "placed in a stationary position and expected to remain still to ensure their proper and safe use" versus stilts "which are intended to function as extensions of and move with the worker during the performance of the designated task." While the majority reasoning does read to this author like a distinction without a difference, it may have the unintended consequence of encouraging defendants to argue that workers who are injured in falls from other moveable safety devices such as scissor lifts and bakers scaffolds, should no longer be afforded the full protection of the Labor Law.