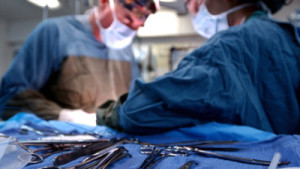 An estimated 400,000 people a year die in the United States of preventable medical errors, the third-leading cause of death after heart disease and cancer. Families of the deceased say they could have known much more if cameras had been installed in the operating rooms, recording the actions and movements of the doctors and staffers involved.

They are enthusiastic supporters of a growing movement that is seeking to require hospitals and surgical suites to have video and audio recording capability. Now, a surgeon in Toronto has built a "black box" that synchronizes a patient's physical data with the video and audio recordings of operation, enabling doctors to review their work the same way athletes watch videos of their performances. And he said he has lined up two U.S. hospital systems to take part in the first testing of the system.

"If we don't know what we're doing wrong, we'll never improve," said Teodor P. Grantcharov, a professor of surgery at the University of Toronto. "This is what many other ­high-performance industries have been using for decades."

A bill that would require cameras in every operating room in Wisconsin has been introduced in the state legislature, and supporters say that lawmakers in other states are closely watching the bill's progress. The proposed legislation, known as the "Julie Ayer Rubenzer Law," is named for a Wisconsin woman who died after she was given excessive amounts of propofol --- the same anesthetic that killed singer Michael Jackson in 2009 --- during breast-enhancement surgery.

Rubenzer's brother, Wade Ayer, founded the National Organization for Medical Malpractice Victims and helped draft the bill, which is supported by patient-advocate groups around the country. Ayer said video and audio recordings can capture the reasons behind "adverse events," as the medical industry terms them, and deter inept or simply bad behavior by medical personnel --- such as the anesthesiologist in suburban Washington who can be heard harshly criticizing her patient in an audio recording made by the patient. The physician was hit with a $500,000 jury verdict.

Currently, re-creating what went wrong in an operating room involves a mixture of memories and whatever notes were taken at the time or shortly afterward, a vague combination that vexes families trying to get to the truth about a failed procedure or a fatal complication. Recording surgeries "offers transparency, truth, and accuracy," Ayer said, "in collecting data for the medical record and testimony. It offers data and insight for medical boards and even prosecutors. It offers oversight and policing."

But the healthcare industry has flexed its muscle where needed, sometimes driven by concerns about the effects that video recordings could have on medical malpractice lawsuits as well as the cost of installing and maintaining complex recording systems. A bill in Massachusetts that would require hospitals to allow recording by a licensed videographer, at the patient's expense, has repeatedly failed in recent years in the face of opposition from hospitals, according to news media reports.

In Wisconsin, Ayer said he has encountered opposition from the medical industry. But state Rep. Christine Sinicki has pressed ahead with what would be the first law in the country to require cameras in operating rooms. "After hearing stories from families affected by malpractice," Sinicki said in an interview, "a lot of people felt the way to rein this in and catch it is to record everything in the operating room."

To contact us about a potential medical malpractice case, please contact us at our Rochester or Buffalo office or call us at (888) 997-4110  for a free legal consultation.