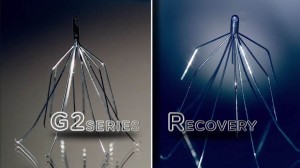 The New Jersey-based medical device giant C.R. Bard, which made a blood-clot filter associated with 27 deaths and hundreds of problems, replaced the device with a modified version that it knew had similar and potentially fatal flaws soon after it was put on the market.

Confidential company records obtained by NBC News show that C.R. Bard was concerned about reports of failures for its G2 series filters, designed to replace the company's Recovery filter, within four months of being cleared to sell the G2 by the Food and Drug Administration.

But instead of recalling the G2 filter, the medical device manufacturer decided to keep them on the market for five years, until 2010, selling more than 160,000 of them.

At least 12 deaths and hundreds of problems are now linked to the G2 series filters, according to Bard and FDA records.

"All of the data that we've seen in our own studies, as well as other clinician-researchers', is that this device consistently fractures, consistently causes major complications," said Dr. William Kuo, an interventional radiologist who runs Stanford Health Care's IVC Filter Clinic, which specializes in removing failed blood clot filters. "The number of complications, the frequency of severe failures makes it obvious that it was never safe to be implanted."

The spider-shaped Bard filters, implanted in the largest vein in the body, called the inferior vena cava, were designed to stop blood clots from moving to the heart and lungs, where they could be fatal.

A confidential study commissioned by Bard showed that the Recovery filter had higher rates of relative risk for death, filter fracture, and movement than all of its competitors. An outside doctor hired to conduct the study wrote that "further investigation...is urgently warranted."

But Bard decided not to recall the Recovery from the market. In 2005, after the device had been sold for three years, the company replaced it with a similar G2 series of filters. Internal Bard records and hundreds of reports to the FDA show that the G2 series did not solve the filter's problems.

A confidential memo written in December 2005 by a Bard vice president soon after the G2 was cleared by the FDA shows his concern about "problems with...migration," "tilting" and "perforation." He also noted that Bard had another filter on the market that had virtually no complaints. "Why shouldn't doctors be using that one rather than the G2?" he asked.

Asked about Grassley's concerns and why Bard's Recovery and G2 filters were not recalled, the FDA declined to answer. The agency said in a statement that it has "investigated the risks of all of these devices," not just Bard's, and "issued safety communications" about "risks associated with IVC filters."

In 2010 and 2014, the agency recommended in those safety alerts that doctors should consider removing the filters from patients as soon as protection from blood clots is no longer needed.

If you have experienced complications from an inferior vena cava (IVC) filter or other defective drugs/medical devices, please contact Hadley Matarazzo at (888) 997-4110 or click here to email her for a free legal consultation.