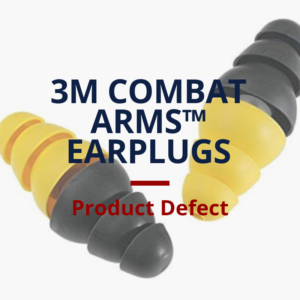 In July 2018, 3M settled a case with the U.S. Department of Justice which alleged that the company had sold defective Combat Arms™ Earplugs, Version 2 (CAEv2) to the U.S. military that reduced the effectiveness of the device.

Thousands of military service members who were deployed to Iraq and Afghanistan from 2003 to 2015 were supplied the defective 3M Earplugs which exposed them to damaging sound levels.

The ineffective design of the Combat Arms™ Earplugs made them difficult to insert deep enough into the ears of some wearers, allowing hazardous sounds to enter the ear. The loosening of the earplugs may have contributed to injuries such as hearing loss and tinnitus, a symptom which causes the perception of noise or ringing in the ears.

Hearing damage is one of the most common ongoing health issues that veterans suffer from and can significantly impact the quality of life of those affected. Depression, anxiety, and difficulties with concentration and sleeping are common side effects of hearing damage.

Although 3M has paid $9.1 million to settle its case with the Department of Justice, the manufacturer has yet to compensate the veterans who have been injured from their defective earplugs.

A defective product claim against 3M for its Combat Arms™ Earplugs would potentially seek compensation for economic and non-economic losses that veterans endured due to their hearing loss injuries such as medical bills, cost of hearing aids, lost earnings, as well as pain and suffering.

If you or a loved one wore the 3M Combat Arms™ Earplugs (CAEv2) and suffered from hearing loss or tinnitus, you may be entitled to significant compensation. Contact us today for a free legal consultation.