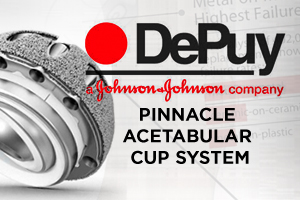 A Texas federal jury ordered Johnson & Johnson and its DePuy unit on Thursday to pay $500 million to five plaintiffs who claimed they were injured by their Pinnacle metal-on-metal hip implants.

This verdict was announced after a two-month trial, in which jurors found that the DePuy Pinnacle hip implant was defectively designed and that the manufacturers failed to warn the public about the device's risks.

The five plaintiffs in the trial said that design flaws in the metal-on-metal Pinnacle hip device caused it to fail, causing injuries such as bone erosions, tissue death, and high levels of metal in their blood.

Around $140 million were awarded in total compensatory damages and about $360 million in punitive damages.

A spokesperson for J&J stated that the company will appeal, which could significantly reduce the verdict as Texas law limits the number of punitive damages that can be awarded to plaintiffs.

The first trial for the DePuy Pinnacle hip implant device ended in 2014, in which Johnson & Johnson was cleared for liability.

There are currently more than eight thousand DePuy Pinnacle lawsuits that have been consolidated in Texas federal court.