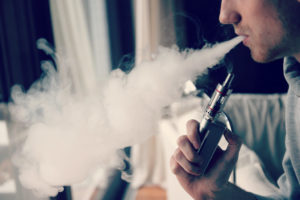 The U.S. Food and Drug Administration (FDA), along with the Centers for Disease Control and Prevention, is investigating a national outbreak of severe pulmonary disease associated with the use of e-cigarette products, commonly referred to as "vaping".

E-cigarettes, which deliver nicotine or cannabinoids through vapor instead of smoke in an effort to reduce the harmful by-products of combustion, became widely available in the early 2010s. Nicotine-vaping rates have especially been on the rise among teens since 2015.

Vaping is still so new that long-term data on inhaling the mysterious chemicals found in both nicotine and cannabis "vape juice" won't be available for years. However, the effects that heavy use of vaping products might have are quickly coming to light.

As of September 6, 2019, the number of severe lung illness cases related to vaping has more than doubled to 450 possible cases from all over the country. The number of deaths linked to the use of e-cigarette products reported to the CDC rose to five.

Officials believe that some chemicals may be the cause but they have not identified a single responsible device, product, or substance.

A MedWatch Safety Alert recently published by the FDA stated that "many of the samples tested by the states or by the FDA as part of this ongoing investigation have been identified as vaping products containing tetrahydrocannabinol (or THC, a psychoactive component of the marijuana plant) and further, most of those samples with THC tested also contained significant amounts of Vitamin E acetate. Vitamin E acetate is a substance present in topical consumer products or dietary supplements, but data are limited to its effects after inhalation."

Director of the FDA's Center for Tobacco Products, Mitch Zeller, explained that concern is specifically around products that are defectively rigged by vaping retailers or mixed by consumers themselves. He urges consumers to avoid using vaping products purchased on the streets or made themselves.

Public health officials are stressing that the rise in lung illnesses is a new occurrence rather than a discovery of a syndrome that may have been developing for years.

Dr. Dana Meaney-Delman, head of the CDC's investigation, stated, "While this investigation is ongoing, people should consider not using e-cigarette products."

If you believe you or someone you know may have suffered a serious illness from the use of a vaping product, contact us for a free legal consultation today.