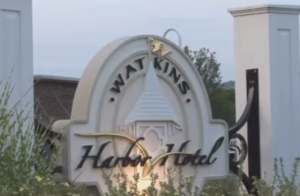 The Watkins Glen Harbor Hotel is responsible for the 2018 death of Virginia resident Vera E. DeWeese, according to a lawsuit filed by Faraci Lange attorney Hadley Matarazzo this week against the hotel's owner, Hart Hotels Inc.

In July 2018, DeWeese, a wife, mother, and grandmother, stayed at the Watkins Glen Harbor Hotel while attending a family wedding. During her hotel stay, DeWeese and other family members spent time in the swimming pool and hot tub. After returning home to Virginia, DeWeese was admitted to the hospital where she was diagnosed with Legionella pneumonia. On Aug. 2, 2018, after a week in the hospital, Vera DeWeese died from sepsis due to Legionella pneumonia.

Other guests who attended the wedding and spent time in the pool and spa at the Watkins Glen Harbor Hotel fell ill with similar symptoms and one other family member required hospitalization due to the severity of her symptoms.

Water samples collected from the Watkins Glen Harbor Hotel pool and spa by the New York State Department of Health revealed Legionella DNA, and a spa culture confirmed the presence of Legionella.

The lawsuit claims damages for the economic loss, pain, and suffering and for the wrongful death of Vera DeWeese caused by the hotel's gross negligence.

"Sadly, Vera's death was avoidable and should never have happened," said Hadley Matarazzo, who is representing DeWeese's estate in the lawsuit. "Vera's family -- her husband, four children, and nine grandchildren -- wants the hotel held accountable for this preventable tragedy."

The Watkins Glen Harbor Hotel pool and spa had been closed previously in March 2018 and again in May 2018 when the state Department of Health found multiple violations of their regulations, including several critical public health hazards.