Although the 2020 presidential election is not until November 3rd, there’s no question that the race is fully underway. In order to run for president, a potential candidate must fulfill 3 requirements set forth in the United States Constitution—Article II, Section 1, Clause 5. The candidate must be a natural-born citizen, at least 35 years old, and a United States resident for at least 14 years.

Primaries and caucuses are the first steps to the election process. Presidential candidates of the same political party compete with each other to become the presidential nominee for that party. Each political party is tasked with narrowing down the best candidate to represent the goals and interests of the party as a whole. However, in order for a candidate to receive his or her party’s nomination, he or she has to win the most state delegates or representatives of party members. Primaries and caucuses are ultimately a process whereby delegates are selected in each state.

Thirty-four (34) states conduct primary elections, including New York, and sixteen (16) states conduct caucuses. The primary and caucus system is the only method in which voters in Puerto Rico, Guam, the US Virgin Islands, and other US territories can have a say in the presidential race.

In a primary, party members vote for the best party candidate that will represent them later on in the general election. Some states have open primary elections, where voters are able to pick a candidate from any party. Closed elections, on the other hand, only allow a voter to cast a ballot for the party that they’re registered. In other words, Democrats vote for a Democratic candidate, and Republicans vote for a Republican candidate. New York is a closed presidential primary state.

In a caucus, party members choose the best party candidate after extensive discussions and debates—a process that can be very lengthy and complicated. Multiple states have recently switched from the caucus system to the primary system. Voters at caucuses select delegates that will represent them at the party's annual convention in the summer.

There are two types of delegates, pledged and unpledged. Pledged, or bound delegates must support the candidate they were awarded through the primary or caucus process. Unpledged delegates, sometimes called superdelegates, can support any presidential candidate of their choice.

After the primaries and caucuses are complete, a national convention is held by each party. The conventions are typically held during the summertime before the general election. The elected delegates from the primaries and caucuses vote for a party candidate, and one final presidential candidate is nominated by each party. The candidate with the most delegates generally wins the party’s nomination. The presidential candidate also chooses a vice-presidential candidate at the conventions. The 2020 Democratic National Convention is scheduled for July in Milwaukee, Wisconsin. The 2020 Republican National Convention will be held in Charlotte, North Carolina, in August. 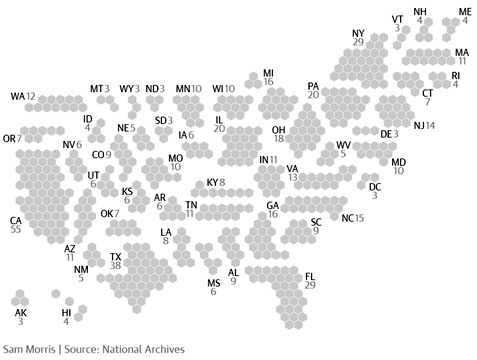 The end of the National Conventions marks the beginning of the campaigning process for the general election. The Democratic party candidate and Republican party candidate go head-to-head through advertising, debates, and rallies. In order to win potential voters for the general election, the candidates explain their ideas about how government should work and their plans for change and improvement. The candidates travel around the country to gain support. A series of presidential TV debates take place.

On election day, Tuesday, November 3, 2020, the people vote for the President—but are actually voting for the group of electors through a process called the Electoral College.

The Electoral College is the official body that elects the President and Vice President of the United States. The Electoral College is unique to the United States and controversial because the president is elected indirectly through electors that are chosen to represent the voters in each state rather than by popular vote. Each state gets as many electors as it has members of Congress (House and Senate). There are 538 electors including Washington, D.C. which was granted three electors in 1961 with the enactment of the 23rd Amendment. Of the 538 electors, 100 represent two senators from each of the 50 states, and 435 represent House of Representatives apportionment based on the state population. The image below shows the number of elector’s by state, noting that New York has 29 electors:

Each state’s political parties choose their potential electors. The Constitution permits each state to determine the method by which electors are chosen.

After casting your ballot for president, votes are tallied statewide. In 48 states and Washington, D.C., the winner gets all the electoral votes for that state. Maine and Nebraska assign their electors using a proportional system.

A total of 270/538 electors are needed to win the presidential election. A projected winner is generally announced on election night after voting is closed. However, the actual Electoral College voting takes place in December when the electors meet in their states and cast their votes. The newly elected President and Vice President are inaugurated in January.

The 12th Amendment of the Constitution protects the Electoral College process, and an amendment is required to change it.