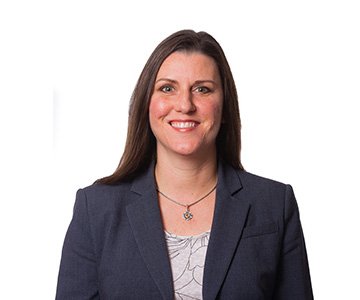 Katie represents the interests of 10 million Excellus and Lifetime health plan subscribers whose personal and health information was compromised during a massive data breach. Katie also represents a class of patients of area hospitals who were overcharged to obtain copies of their medical records, in violation of New York State law. Most recently, she was successful in winning a favorable settlement for clients in a class action related to violations of the Fair Labor Standards Act and New York Labor Law for unpaid overtime hours. Katie has successfully resolved cases before the United States Court of Federal Claims involving injuries sustained by adults following vaccinations.

In 1999, Katie completed a two-year judicial clerkship with the New York State Appellate Division, Fourth Department, where she worked on a wide variety of civil and criminal appeals. After her appellate clerkship, she joined the Litigation Department of Nixon Peabody LLP, and later joined Ward Norris Heller & Reidy LLP (now Ward Greenberg Heller & Reidy LLP), where her practice focused on civil defense litigation.

In 2002, she accepted an appointment as confidential law clerk to the Hon. David G. Larimer, then Chief Judge for U.S. District Court for the Western District of New York. During her five years in Federal Court, Katie gained invaluable experience working closely with the Court in preparing for and deciding civil motions and cases involving a broad array of New York State and Federal Law, and assisting the Court with all phases of trials, including pre-trial motions, evidentiary issues, and drafting jury instructions and verdict sheets.

Katie volunteers for Camp DayDreams, a program affiliated with the Boys & Girls Club of Rochester that develops, challenges and empowers Rochester’s urban youth to serve themselves, their families and their community as vibrant individuals through its “Camp & Grow” program.

Katie is a member of the Board of Directors of the Braddock Bay Bird Observatory, a non-profit organization dedicated to ornithological research, education and conservation, and currently serves as Board Secretary.

Katie loves spending time with her husband and daughter, as well as hiking, birding, reading, meditation, and yoga.

A number of years ago, as the result of a medical malpractice, I found myself in the position of needing a lawyer. Asking a select few of acquaintances for recommendations; all responded with the name of Faraci Lange. After speaking only briefly with Katie Bruns & Hadley Matarazzo, I felt confident in basing my decision on that totally unscientific method of "just felt right". It was later that I became so very grateful for that decision. My only previous experience with a lawyer, buying house etc- quite honestly I was never quite sure just what it was they did...figured it was just another cost. With FL I saw they really were working for me...and working hard. Their knowledge, thoroughness & professionalism are what is behind the impressive reputation. I am confident it was through their dedication and thoroughness we were able to reach decision in the case. Yet it's our interactions I feel strongest-the support & interest they gave me made all the difference.

Faraci Lange is an amazing law firm who I would highly recommend although I’m in another state but I still would. Kathryn Lee Bruns always treated me like top priority even though I know she was busy with so many other cases. I always felt very taken care of, with great communication and follow-up. Always kept me in the loop with details and dates and anything else I needed. I am so very glad I found Faraci online.