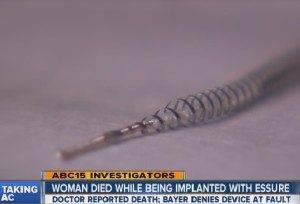 The Food and Drug Administration published an adverse event report on February 20th, 2015, stating the death of a woman while she was being implanted with Essure permanent birth control.

Essure is a birth control device manufactured by Bayer that over 75,000 women are using, which is implanted inside the fallopian tubes with two metal coils to block conception. Thousands of women, however, have reported serious side effects due to the use of Essure, such as severe pain, miscarriages, the coils cutting through organs, and autoimmune disorders. Doctors and patients have filed over 4,500 adverse events reports to the FDA describing such negative side effects, including death.

This recent FDA adverse event report filed by a doctor describes how "the patient suddenly coded," when the doctor was inserting the second coil via a catheter into her fallopian tubes.

The pathologist reported that the cause of death was not likely due to the procedure. Bayer responded to the FDA that they, "are unable to confirm any quality defect or device malfunction at this time" and that, "death is not a known failure mode related to Essure."