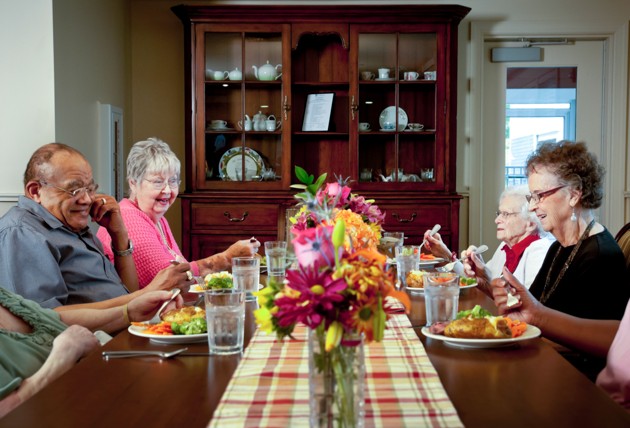 Seniors around the communal table at a Green House

America is aging and still hasn't come to terms with it. By 2050, one-third of the population of the U.S. will be 65 or older, according to the Congressional Budget Office. About 4 percent of the population will be 85 or older, and more than half of them have difficulty performing one or two "activities of daily living," which include bathing, dressing, eating, walking, transferring out of a bed or chair, and using the toilet, the CBO says.

Long-term care is expensive, and many people don't want to go into the type of nursing home they can afford, which often feature shared rooms, industrial cafeterias, and overworked staff. Nor can many people afford to live at home, especially if they require 24-hour care.

So elderly people move into assisted living, and then when they get sicker, they move into nursing homes, where they get round-the-clock care but where their freedom is often limited. Happiness is often curtailed there: Studies have shown significant rates of depression among nursing-home patients, and anticipation of being placed in a nursing home can lead to patient suicide.

An alternative to the traditional nursing home may be the Green House Project, which was created by Bill Thomas, a doctor who started working at a nursing home in upstate New York in 1991 and wanted to make residents less lonely.

In 2000, Thomas decided to build a nursing home from the ground up, taking into account the lessons he had learned in upstate New York. He wanted it to be affordable, so it could accept Medicaid patients, but he didn't want it to look like a place that was built with only economic efficiency in mind. Most of all, he wanted it to look like a home, not a hospital.

Thomas persuaded an organization in Tupelo, Mississippi to build the first "Green Houses." Each home consisted of 10 to 12 private bedrooms, each with its own private bath, arranged around a communal living area and kitchen. In each home, there are primary caregivers called Shahbazim, certified nurse assistants who also handle some food preparation, light housekeeping duties, and plan activities for residents. They work as a team with other Shahbazim, which gives them the ability to manage their own work schedules and make decisions collaboratively.

There are currently 173 Green Houses operating in 27 states, and more than half of the residents are on Medicaid, Brown said. Some Green Houses are in single-family homes in the suburbs, others are in more rural settings. In Loveland, Colorado, the public-housing authority built a Green House. Most are around 7,000 square feet.

Read the full article and learn more about the Green House Project at The Atlantic.